DISCLAIMER – Lithium batteries are DANGEROUS! We know enough about what we are doing and especially we NEVER put anyone but us in danger. In no respect shall we incur any liabiity for any damage to people or things happening due to you doing what is written in the following article.

Stai cercando l’articolo in italiano?
Did your old trusty cordless drill die out due the batteries not being able to provide enough juice? Are you as annoyed as us about throwing stuff away? Well, here’s a solution you may want to look at. 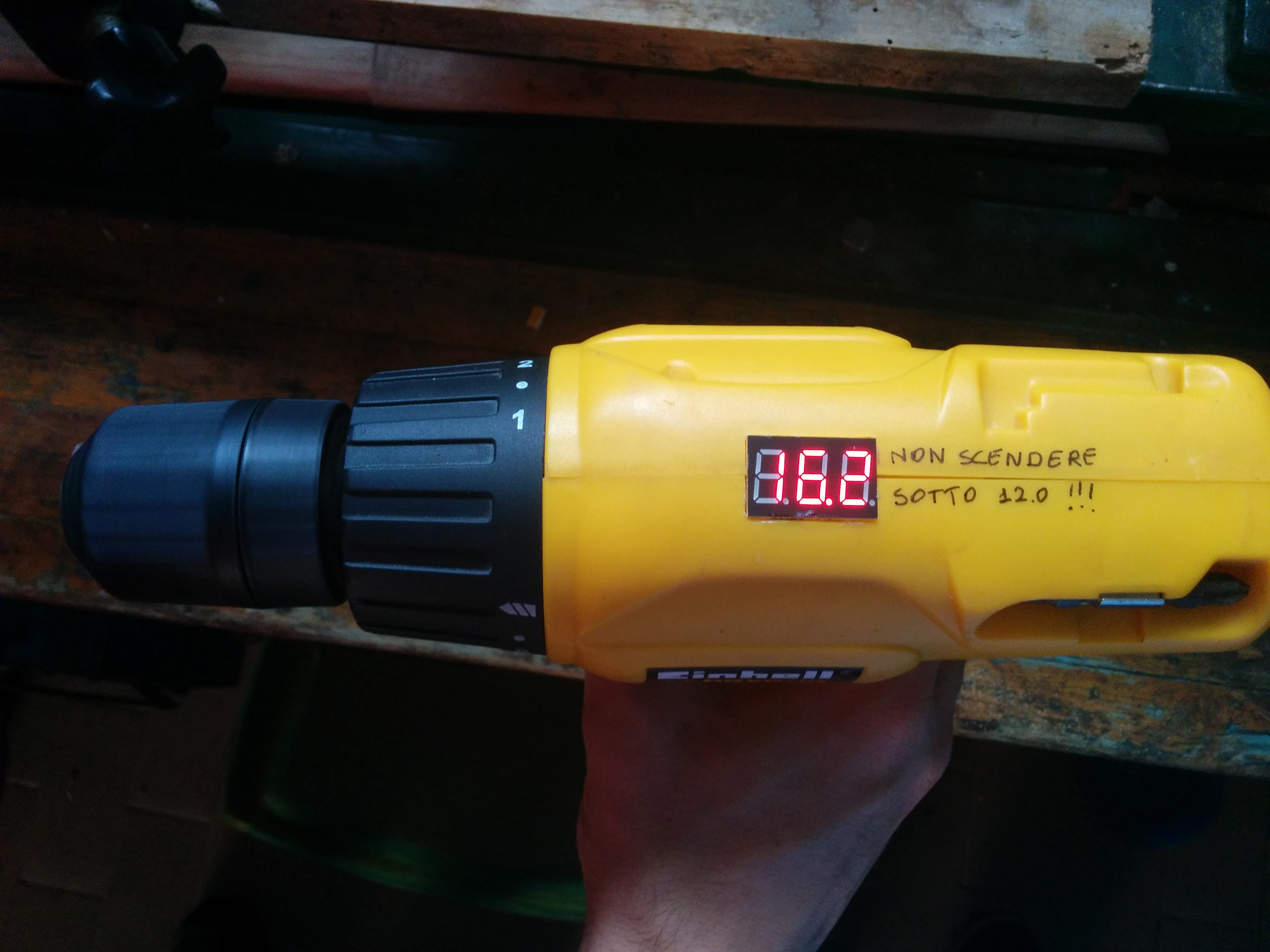 A few years ago I had already converted a NiCd drill to lithium, using A123 18650 LiFePO4 cells, which were great for my use. Sadly A123 has gone bankrupt and stopped producing 18650 cells (at least, to my knowledge), meaning that all the cells that can be bought now are either old stock or fake. It’s a pity, because LiFePO4 cells are virtually indestructible (2000 cycles at 100% DOD) and can be balanced with a circuit as simple as a single zener diode, due to their voltage skyrocketing when charge is complete.
For this project I had to resort to INR cells, in particular SAMSUNG INR18650-25R which are specifically made for power tools, and are well known on the net by the vaping and flashlight community for their great behavior under very high load. They are 2500 mAh, rated for 25A continuous load, and their chemistry is safer than LiPo. The continuous load is a critical parameter for a cordless drill because when high torque is required, it may draw up to 40A (see the last attached picture). Standard batteries are just not suited for the job, because they are usually only rated for 2C discharge (that is, 2A for each Ah of capacity) and may be very bad performer under high load, will be quickly damaged or even just straight explode.
The single cells must then be soldered together. Ideally, you should use a spot welder with Nickel tabs. Obviously, we are broke and don’t have one, so we resorted to a proven DIY method employing one high-power soldering iron (80W or above), acid flux (which must be cleaned off after soldering but is terrific for soldering to battery terminals), leaded solder (ideally 63/37 eutectic because it has a low melting point) and standard copper wire (I used 2.5 mm2 which corresponds to AWG 13).
I strongly suggest to pre-cut and pre-tin the wire and ask another two-handed human being for help. Don’t forget that together with the main thick wire you have to solder the balancing connector wires.
A word of warning: soldering lithium cells is pretty dangerous. You should heat the battery as little as possible, be very quick and promptly cool down the cell as soon as the solder has made good contact. These Samsung cells feature a built-in one-time fuse that is triggered in case of battery overheating. It is a safety feature intended for preventing potentially explosives short circuits, but will also trigger if the soldering process takes too much time (ask me how I know it…). If it happens, the battery is ready for being recycled because there is no way to reset such fuse. I would recommend to use silicone insulated wire because it is much better suited for handling high temperatures such as those reached during the soldering process. Obviously, we are broke and only had standard PVC wire that more or less melted completely. 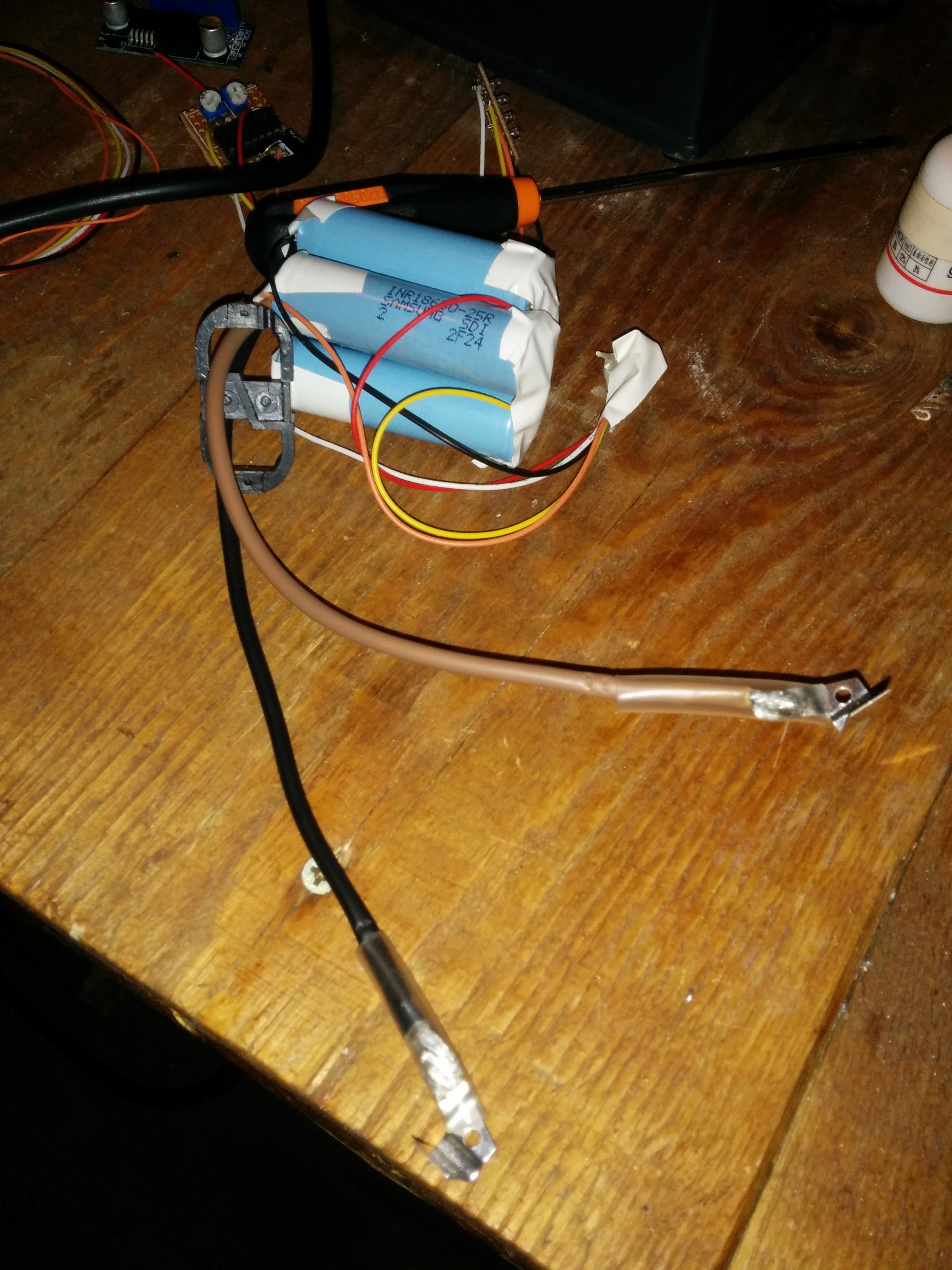 Now, I would like to spend a couple of paragraphs explaining the balancing circuit I came out with. As far as I know, there are no similar circuits on the web. The working principle is rather simple: the LED sides of the optocouplers are wired together in series and grounded through a current limiting resistor and are driven at about 3mA. The current transfer ratio is about 2, so we have roughly 6mA going into the base of the NPN transistor that is brought into saturation and enables a TL431 which is set to maintain a 4.2V across the stage (50mV over the NPN transistor, 4.15V across the TL431) at a current of 50mA (value arbitrarily chosen to prevent overheating yet provide a reasonable balancing speed).
Calibration is mandatory and if you don’t have any specialized equipment, you can use the same DC-DC module that you will use for the charger by setting it to a voltage higher than 16.8V and a current limit of 50mA; then, just tweak the pots until every stage has a 4.20V drop over it, wait for it to heat up and then tweak it again if needed.
The optocouplers are powered through the central connector of the battery pack, usually employed to sense the pack temperature through a thermistor, so that when the battery is not in the charger the leakage current is kept very low: the phototransistor only has a 100nA dark current and thus the NPN shouldn’t be drawing more than a couple of uA from each cell. I added a small heatsink on top of the TL431 because they were rather hot, but we are still well below the package thermal dissipation limit so it is not mandatory.
This allows us to have a cheap-ass balancing circuit that is fully solid-state and does its business. The components are super-common and can be bought on Aliexpress for very little money. WARNING: this is just a balancer, won’t provide any sort of protection against overdischarge/short circuit and the overcharge protection is very mild. 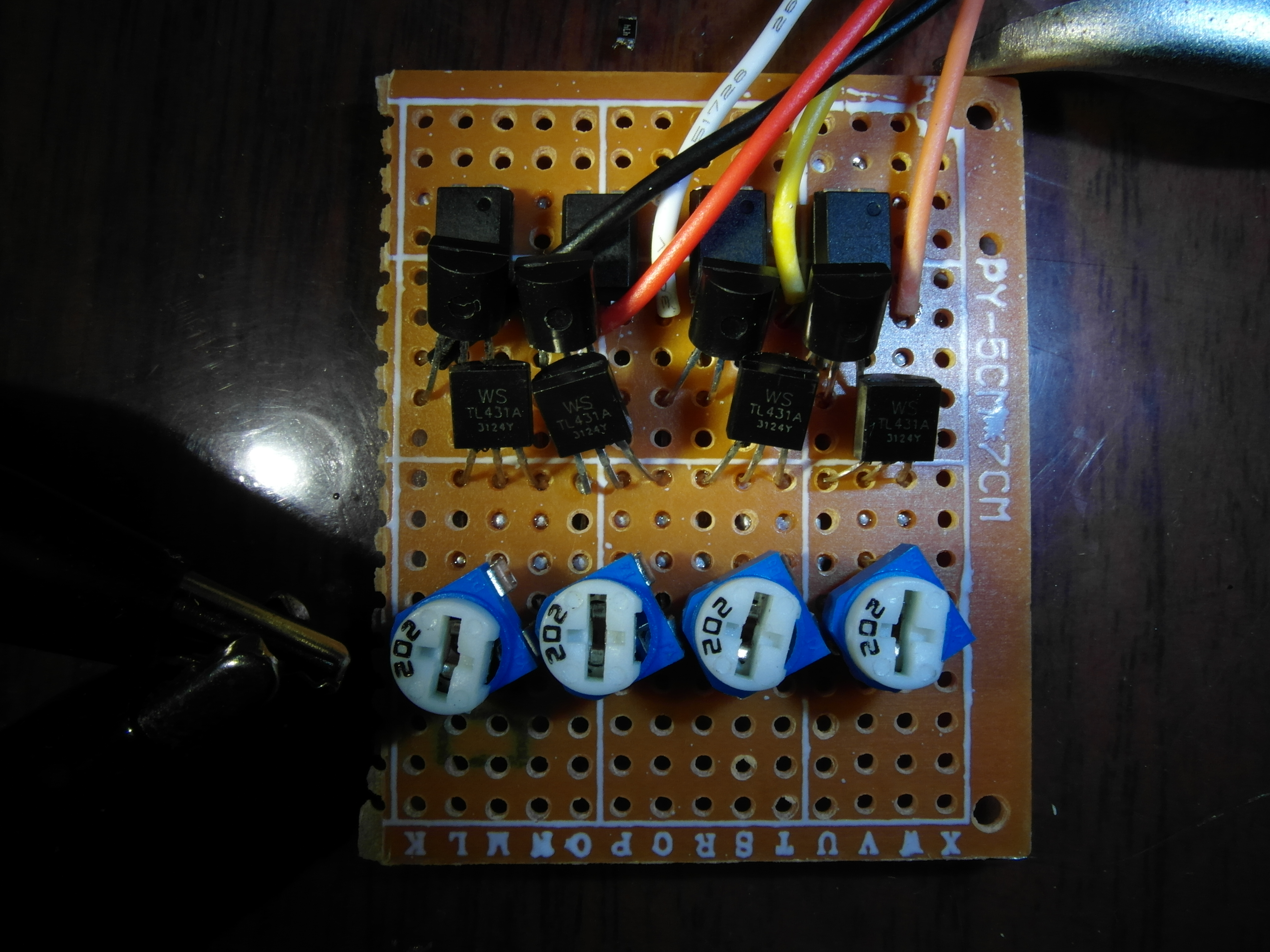 The balancer is intended for staying inside the battery pack so that there is no way of plugging it in backwards (it would be destroyed) and even an unexperienced person can correctly charge the pack: just throw it in the modified charger like a normal NiCd pack.
Now, of the original battery charger we will just keep the transformer, the rectifying bridge, the connectors, the LEDs and the case. All the electronics will be replaced by an adjustable DC-DC buck converter from – you guessed it – Aliexpress. It is the kind with 3 trimmers, that allow us to set the final voltage (4*4.20V=16.8V) and the charging current (we went for 2A, so we had to add a small heatsink). The third pot is to set the threshold at which the “charge finished” LED turns on, but we won’t use it. We also had to increase the capacitance after the rectifier bridge by adding a 35V 2200uF capacitor to get a reasonable ripple at the input of the DC-DC module.
We were able to fit it all inside the original case with no grinding/cutting whatsoever, probably thanks to our extensive training in playing Tetris, but YMMV. The two original LEDS were employed as such: the RED one was wired in place of the LED on the module indicating the CC phase; the green one is wired in series to the central connector and indicates that the balancing circuit is being powered on. So, when the red LED turns off, we know that the battery is almost fully charged or fully charged.
Now, the last problem is to ensure that we won’t overdischarge the battery pack. In order to do it, I had originally planned and built a 4-LEDs battery level indicator based on a TL431 as a reference and an LM324 quad-opamp, but unfortunately we couldn’t find enough room to fit the PCB in the drill, so we ended up using a small 7-segment voltmeter and writing a warning not to go below 12.0V. Anyway, both the schematics and the pictures are available in the gallery at the end of the circuit. We kept the “Indicator enable” part of the circuitry because it is a neat way to enable the voltmeter whenever the motor is running, whichever the direction, with no modification to the pre-existing electronics in the drill, and also allows to sense the battery voltage straight at the battery terminals, with wires that to not need to carry all the current of the motor. In virtue of this, the reading should be reasonably accurate (I calibrated the voltmeter using an AD584 reference, but it’s overkill, and it was only off by 50mV or so).
And after all these words, here’s a gallery with some pics:

And, just to prove that we are not writing about stuff that does not work, here is a super quick proof video: